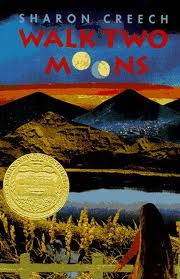 This Newbery Winning book brought mixed reactions. Rebecca liked it while Carol was not overly impressed. None the less, many love this book and so here is a summary and some ideas for using it in the classroom.

Salamanca's mother has left without explanation and not returned. Now 13 year old Sal is traveling across the country with her grandparents following the route her mother took. Along the way her kind and fun-loving grandparents ask her to tell them a story. She shares a long tale about herself and her best friend whose mother has also left her family. Throughout the book the cross-country trip and the story Sal tells are interwoven. There is comedy in the grandparents' eccentricity and poignancy in the story Sal tells to her attentive grandparents.

We get well-developed characters, humor and plot twists. You'll find a lot here about Sal's relationship with her friend, her father, and her grandparents. Her relationship with her mother is complex and Sal's refusal to accept the reality of her mother's disappearance creates affective tension throughout the book. You'll also find mystery and intrigue in Sal's quest for her mother and the mysterious notes leading to her friend's mother.

Related Areas on Other Web Sites

You can purchase this book at Amazon.com Bookstore